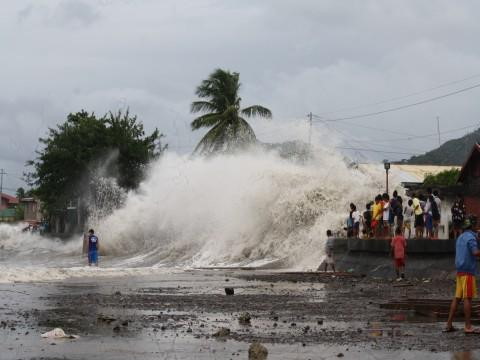 Calamities happen all the time.  An asteroid hits the planet and wipes out the dinosaurs.  A bank panic causes bank failures and a depression.  The Red Sox trade Mookie Betts to the Dodgers and have a miserable season.  Some people would take exception that that last one is not a true calamity.  But then they would not be true Red Sox fans.

Some calamities do real damage to prices in real estate markets.  Others are like a drop in the bucket, making barely a ripple.

Here are some calamities since 1970:

Of these, quarterback exits, terrorist attacks, and temporary interest rate hikes have had the least impact.  Pandemics are intermediate.  And, at the extreme, tax law changes and recessions have effects that are like asteroids in the age of the dinosaurs, wiping out investment portfolios entirely.

9/11 caused a sharp drop in airline travel and a general hesitation to go back to stadiums, places of worship, and anywhere groups might gather.  At the time, the American public worried  that we might have found a new normal, with continuing terrorist attacks and public life seriously altered.  But in time we got past that.  And when the dust cleared, there had been hardly a downtick in the real estate market.

The interest rate hikes of 1980 made real estate transactions much more difficult.  But prices held up, rates came down over time, and in the end the effect on real estate markets was small.

The pandemic that is on us today has not caused a decline in prices for small apartments in Greater Boston.  (See the accompanying article: “Third Quarter 2020 Small Apartment Price Trends.”)  Prices for owner-occupant offices similarly have held up and are indicative of one part of the market.  The bio sciences market is thriving in the pandemic, with new construction under way as far from this sector’s home at Kendall Square as Devens and Worcester.  But work-from-home, a trend that has emptied out office buildings in the Financial District, is a trend that was unseen before the coronavirus.  It was caused by the virus, is likely to outlast the virus, and may cause serious long-term decline.  Internet shopping has taken off in the pandemic.  It was a trend before, and it got a boost from the virus, knocking retail stores for a loop.  This, too, may well continue.  This is an effect of a calamity: a market that was already vulnerable, showing slippage year by year, is hammered down hard when the calamity finally arrives.

The tax law change of the late 1980s that disallowed “tax losses” to offset earned income, as they had previously, had a strong effect on real estate markets.  Declines in value of 50% were common in the early 1990s in apartment, office, and industrial markets and caused a wave of foreclosures, even for buildings where property owners were able to make mortgage payments.  The buildings were “under water,” and federal regulations said that, where that was the case, the mortgage must be paid down.  For owners who couldn’t pay their mortgage principal down to a reasonable loan-to-value ratio, the fate of the building was the auction block.

The Great Recession of 2009 had a similar effect.  Financing became hard to get.  Office values were again hammered down.  Even the single family market faced a price drop.  The drop hit hardest in low-income communities that had seen the fastest run-up in prices in the years before.  What went up fast came down faster, and, in later years, cities like Lawrence and Fall River took longer to recover than did wealthier suburbs.

All this should be good advice for those who want to see where future risks lie.  In some kinds of calamities, the sky – your investment – really is falling.  In others, it is a great deal of worrying that pans out to be nothing at all.